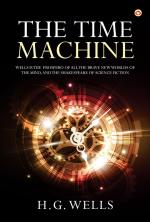 H.G. Wells, the author, has been called the father of science fiction. The Time Machine is one of his most notable science fictions. Its a Time Travellers journey into the future. He explains that there are really four limensions, three of which we call the three planes of the Space, and a fourth, Time. Also, there is no difference between Time and any of the three dimensions of Space except that our consciousness moves along it. The book narrates how the Time Traveller plans for a machine to travel through time and disappear. Comparison between the present time and future time. Like as, the air is free from gnats, the earth from weeds or fungi; everwhere were fruits and sweet and delightful flowers; brilliant butterflies fly hither and thither. The ideal of preventive medicine is attained. Diseases are stamped out. No contagious diseases. Even social triumphs too is effected. Like as, the mankind is housed in splendid shelters, gloriously clothed, and as yet are not engaged in toil. No signs of struggle, neither social nor economical. The population is also ceased to increase. No one can predict anything about the future Time. This book seems very interesting, in this way. Solves many queries raised by the various characters in the book with the Time Traveller. The author has written his best to enthrall the readers. Many future films and Television Series are made on The Time Machine, which has in turn inspired to write new books on the topic of The Time Machine.