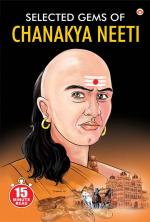 He is the pioneer of an intellectual tradition initiated for the orderly conduct of the Indian economic, political, academic, and social system. He eliminated the enemies by his strategies. He gave a coveted position to Sanskrit literature by his sheer brilliance. He presented his entire life to others as a benchmark to be studied. He gave importance to character, pride, and commitment towards duty. The name of such a colossus is 'Chanakya'. He was endowed with a sharp intellect, strong resolution, sheer brilliance, foresight and thus a man of that era. He had only one motto in his life  'Buddhirdasa Balam Tasya' i.e, One, who has intelligence has the might! Keeping in mind the growing popularity of Chanakya's literature among the readers, we have published this 'Combined Edition'. It is our aim to make Chanakya's invaluable wealth as a great scholar, easily available so that everyone can lead a planned and prosperous life. Also, I personally feel that everyone must read this book. Acharya Rajeshwar Mishra